How Eco-Conscious Are Boomers, Gen-Xers and Millennials?

Lately, it feels like each generation has a bone to pick with its predecessors or successors. But when it comes to the most environmentally friendly behavior, is it the Boomers, Gen X, or the Millennials that are the “greenest generation”? We surveyed 2,000 Americans from all three generations to find out just how eco-conscious their habits are and scored the groups based on their earth-friendly behaviors. Check out who ranked highest in the graph below. 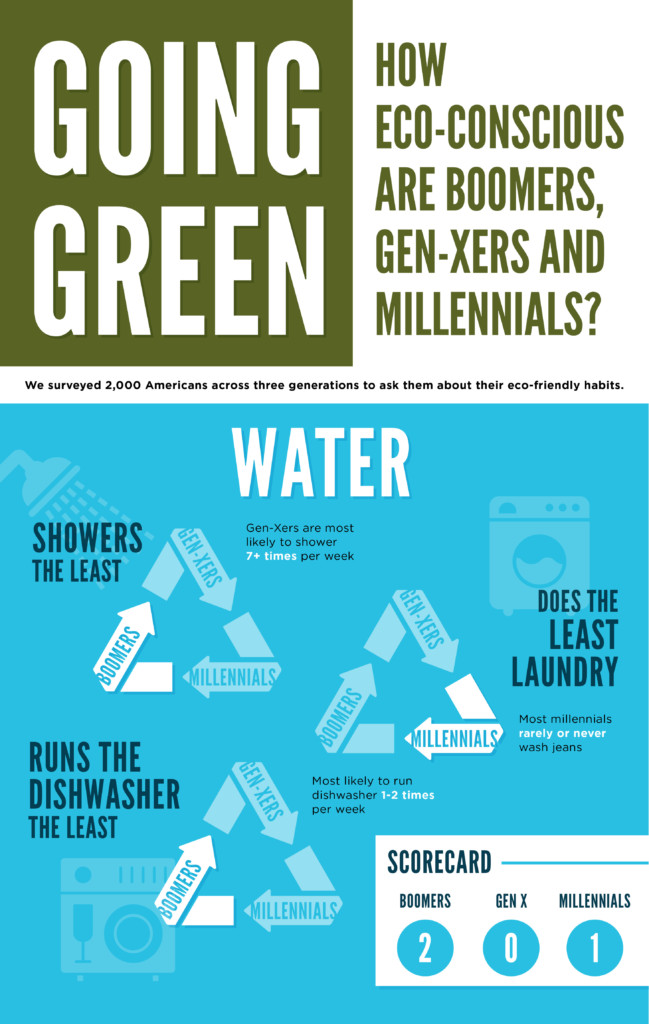 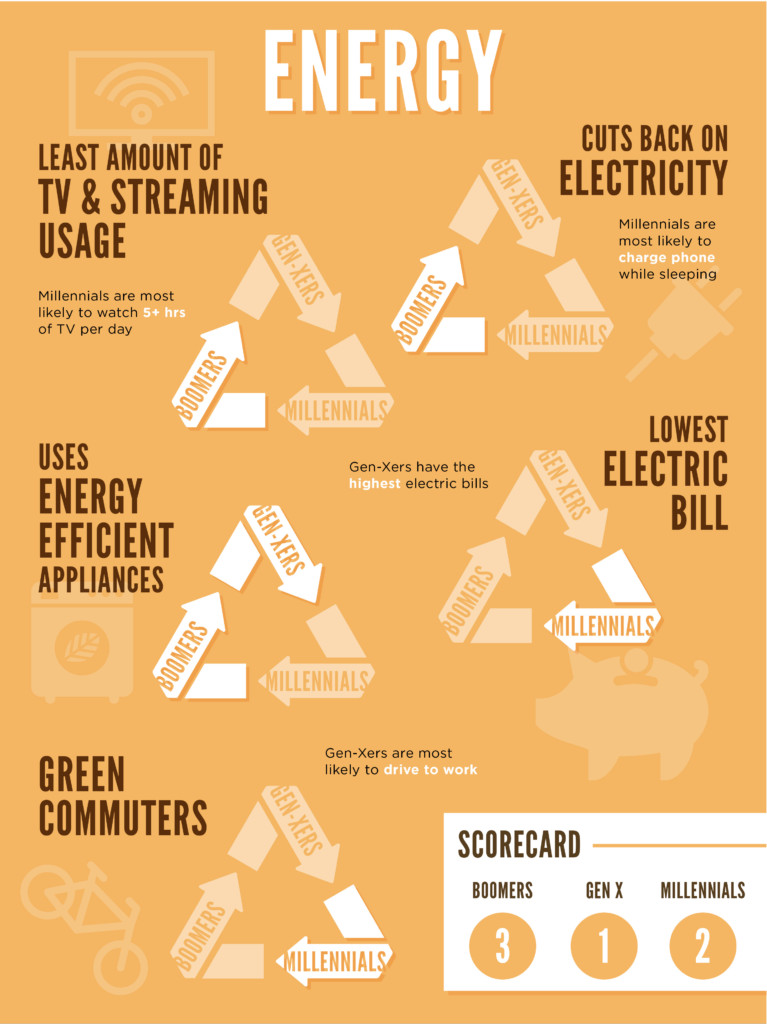 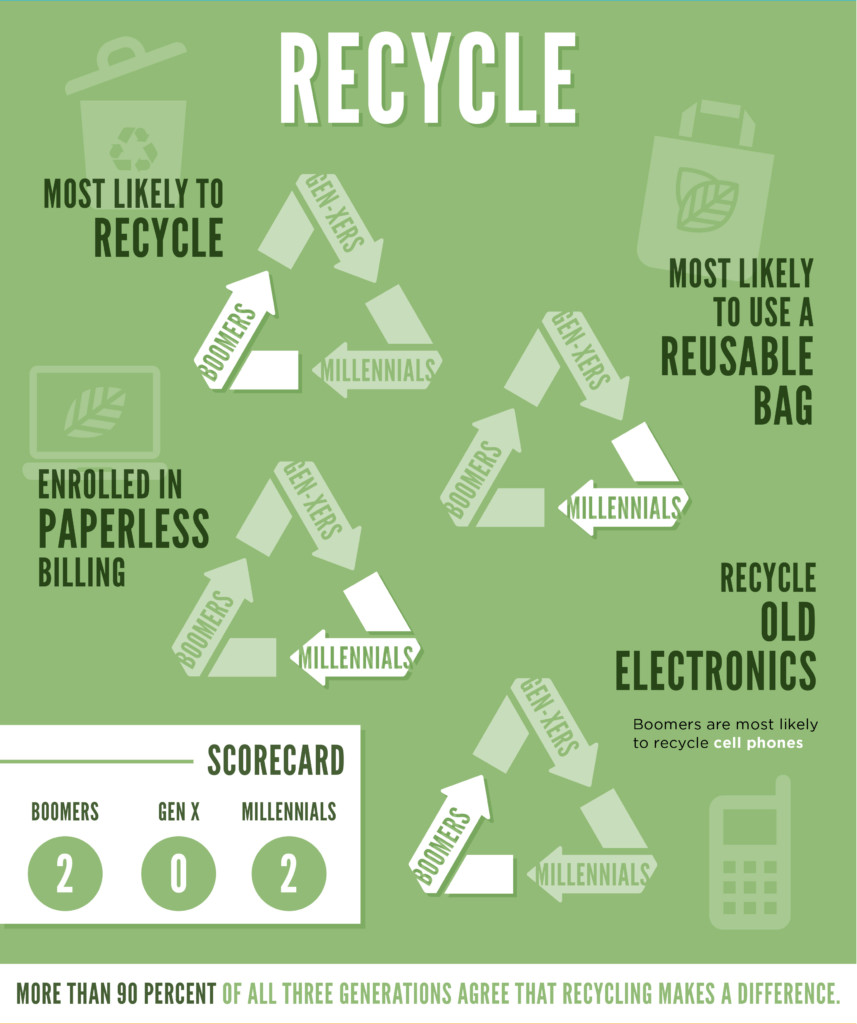 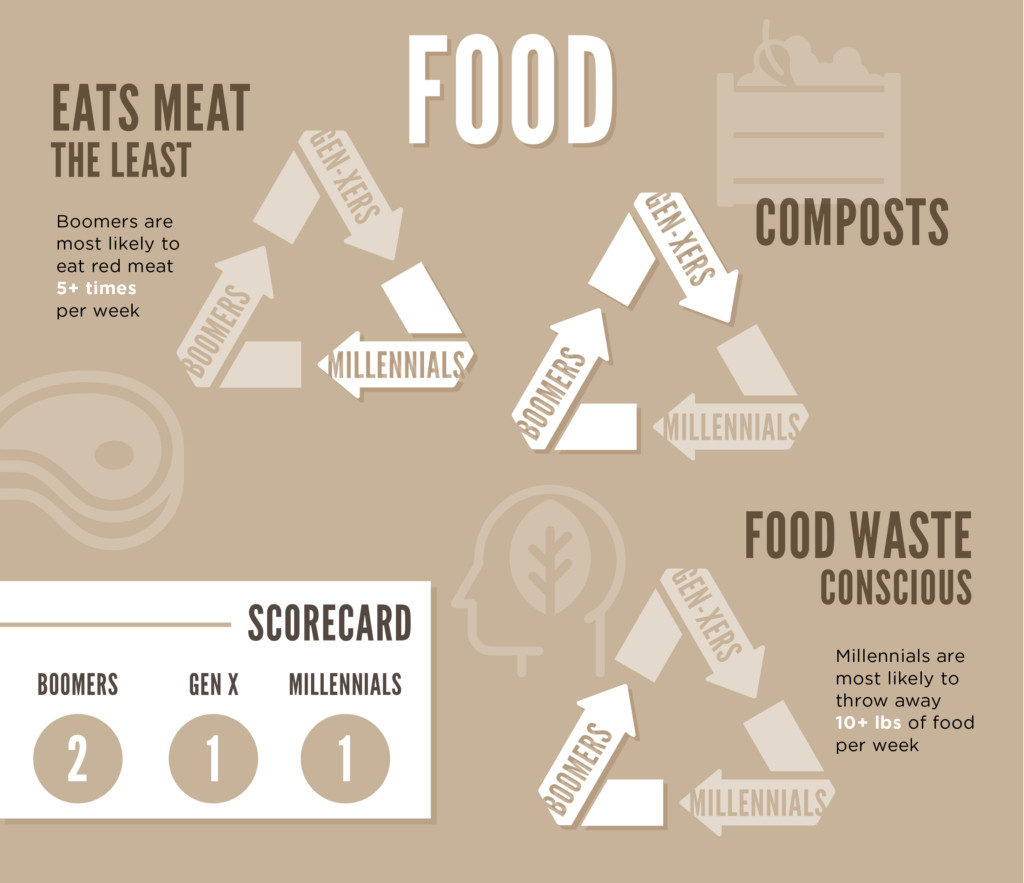 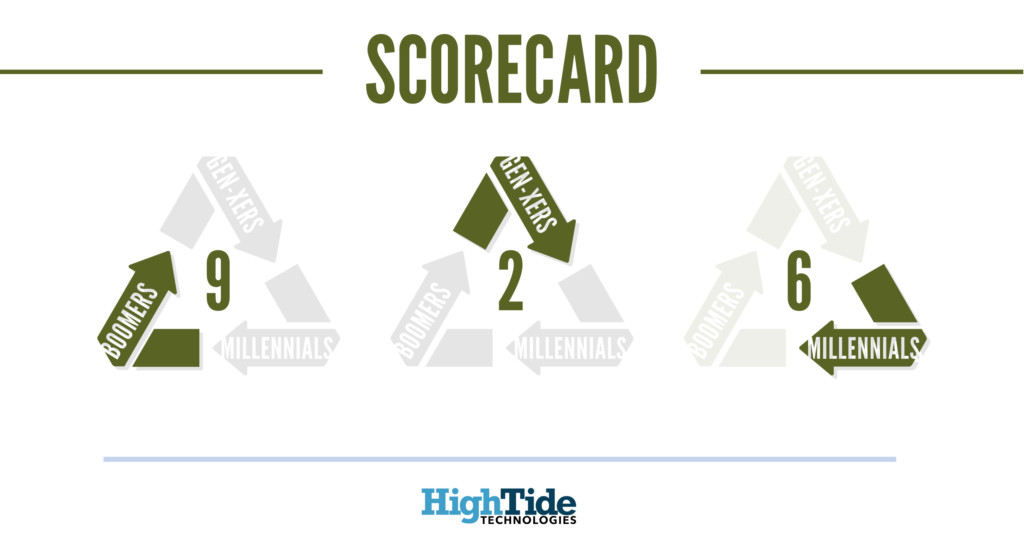 When it comes to our most precious resource, Boomers are leading the most conservative path by showering and running the dishwasher the least-Gen-Xers are most likely to shower more than 7 times in a week. Millennials are keeping their jeans as fresh as possible by never or rarely washing them, which helps cut down on water waste.

According to the survey, more than 90% of all three generations agree that recycling makes a difference. However, Gen-Xers are coming up short with a zero score, whereas Boomers and Millennials tie for first with two points apiece. Millennials are most likely to use paper billing and reusable bags, cutting down on excess paper products, and Boomers are more likely to recycle electronics like cell phones, according to survey results.

One of the biggest categories for eco-consciousness is energy and again, Gen-Xers are in last place with one point for their use of energy-efficient appliances-a good habit they share with Boomers. Boomers also have the least amount of TV watching or streaming usage and cut back their electricity usage the most. Millennials, however, tend to suck up electricity even when not awake by choosing to charge their phone at night. Boomers and Gen-Xers are also more likely to use Energy Star appliances, however, Gen-Xers tend to have the highest electric bills. Millennials also embrace the green commute, choosing public transportation or cycling over driving. Once again, Gen-Xers are the most likely to drive to work.

However, when it comes to food, one good habit cancels out the other for Boomers and Millennials. While Boomers are most likely to eat meat more than five times a week-a disastrous strain on the environment-Millennials are the most vegetarian-conscious generation. Conversely, Millennials are more likely to waste more than 10 pounds of food a week whereas Boomers are the most careful about food waste, choosing to compost instead. Gen-Xers also opt for composting, proving that younger generations could stand to learn something from their elders.

At a paltry two points, Gen-Xers lose at the Generational Eco-conscious Olympics. Millennials put up a solid score of six but get dinged on things like food and energy waste. According to the survey, with a score of nine out of 17, Boomers are considered the most eco-conscious of the current generations-though all three groups have areas for improvement. By doing things like cutting back on electricity, being food conscious and using composts, and recycling, Boomers demonstrate that real care for the environment begins with developing daily good, Earth-friendly habits.

After surveying 2,000 people across the country, we broke down the responses based on age in order to compare eco-conscious habits across three generations: Boomers, Generation X, and Millennials. We asked respondents about their daily habits when it comes to their water, food and energy usage as well as their recycling habits.

Are you interested to learn more about High Tide Technologies’ solution?